The former Paris Saint-German boss was brought in to replace Frank Lampard last week with a brief to haul stuttering Chelsea back into the race for the Champions League spots.

He endured a frustrating goalless draw against Wolves at Stamford Bridge in midweek but two moments of magic from Azpilicueta and forgotten man Alonso mean the German now has four points from six.

The result lifts Chelsea to seventh in the table, just four points behind fourth-placed Liverpool, who are in action later on Sunday.

Tuchel said the victory would infuse his side with confidence but said they needed to sharpen up their finishing after both goals came from defenders.

“It should be a signal to our guys up front that we needed defensive players to score,” he told BT Sport.

“We lacked precision in the last pass and touch, but in the finishing we will work on this absolutely. We had a lot of touches, half-chances and deliveries in the box, but in the end I could not care less.”

Sean Dyche’s Burnley promised to be awkward opponents, especially in the early stages, but they faded badly as the match wore on and failed to produced a single effort on target in the entire match.

Tuchel is still figuring out his strongest team and drafted in Alonso and Mason Mount as he made four changes to his starting line-up from the Wolves game.

Alonso had fallen out of favour under Lampard, not featuring since September, while in-form England midfielder Mount was a surprise omission against Wolves after a fine season so far.

Burnley started brightly, enjoying plenty of possession and finding space but failed to test Edouard Mendy in the Chelsea goal.

The home side took time to settle into a rhythm but as the first half wore on they started to dominate and created a series of chances.

Chelsea finally got the breakthrough their football deserved five minutes before half-time after breaking at pace.

The ball was worked to Callum Hudson-Odoi on the right side of the Chelsea attack who cut inside and played a neat reverse ball into the path of Azpilicueta.

The Spain international, who had raced from deep inside his own half, produced a thumping side-foot finish past Nick Pope.

Chelsea started the second half on the front foot, pinning the visitors back and creating a succession of chances.

The luckless Werner, who has not scored in the Premier League since November, headed straight at Pope before the lively Hudson-Odoi hit the post with a powerful defected shot.

Christian Pulisic, who came on at half-time to replace Tammy Abraham, mishit his shot after more good work from Hudson-Odoi before Pope saved with his legs from substitute Reece James.

But Chelsea had little to fear at the other end, especially after Burnley lost the physical presence of forward Chris Wood shortly after the hour mark.

Alonso sealed the three points six minutes from time when he controlled a Pulisic cross on his chest and thigh before lashing past Pope.

He kissed his Chelsea badge as the players celebrated a vital three points.

Defeat for Burnley leaves them 16th in the table but eight points clear of the relegation zone. 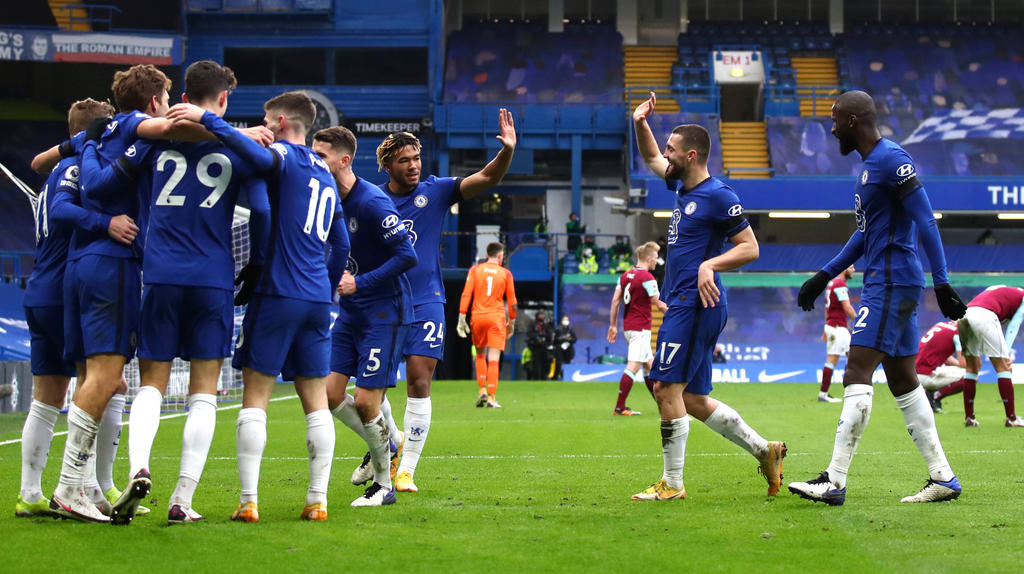